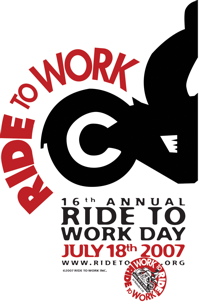 Tomorrow is the third Wednesday of July — which means it’s Annual Ride to Work Day! Ride to Work Day is an annual event intended to raise awareness of motorcycles and scooters as daily commuter vehicles.

The idea was proposed in 1992 in Road Rider magazine (now known as Motorcycle Consumer News) after a columnist mentioned that it would be neat if there was one day a year when everyone who owned a motorcycle used it to ride to work. The idea grew and was informally promoted by various businesses each year until 2000, when the non-profit Ride to Work was formed.

I commute on my motorcycle as much as I can. Traffic congestion is less of a problem, parking is much easier in crowded urban areas (provided your city isn’t actively anti-motorcycle) and the reduced fuel costs are awesome.

This entry was posted in Motorcycling. Bookmark the permalink.